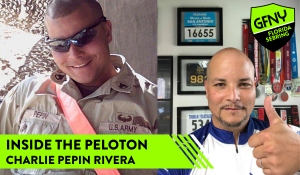 Charlie Pepinrivera is a highly decorated US Army veteran and Wounded Warrior who will ride inside the peloton at GFNY Florida Sebring this Sunday, October 31.

He retired after 24 years of service and served 5 tours of duty in Iraq, Kuwait, Bosnia and Afghanistan. After getting shot during a military operation in Afghanistan, falling from a military helicopter, 14 surgeries and being 100 lbs. overweight, he was struggling with anxiety, depression and PTSD.

Charlie mentions that cycling saved his life. “After recovering, I wanted to feel like myself again and the only thing that helped me was God and cycling”. Cycling put him together with other disabled veterans he would have never met otherwise.

When first getting into the sport, his wife Maribel bought him his first bike. Within 6 months, he lost 80 lbs. and his anxiety and depression got much better. He still battles with this but when that happens, he hops on his bike.

“I love cycling so much that when I am not on my bike, I dream about it”.

When asking Charlie for the thing that drives him, he has two clear answers for me. First he mentions his incredible family, who were there for him when he got hurt fighting for freedom. “When I was in the hospital, my wife never left my side”, Charlie says.

Next, he mentions endurance sports drive him and cycling in particular as he experienced first-hand the changes it can make to a person, both physically and mentally.

Whenever Charlie feels like he wants to throw in the towel, he tells himself to “NEVER GIVE UP”. It reminds him of all the struggles he’s had to face in his life and of everything he has accomplished.

Charlie mentions that for the future, he will focus on becoming a better cyclist and is determined to ride at least 3 GFNY races next season.

He would also like to motivate others who are struggling to find the relief he found in cycling. “Cycling is my motivation to keep going and be an example to others“, he says.

Charlie decided to join GFNY in Florida Sebring after reading an article about GFNY in the USA cycling newsletter he receives every month. “After that, I found some videos on YouTube and fell in love with GFNY. Florida has a special place in my heart and I can’t wait to be there this Friday and race on Sunday.”

Etiquetas: inside the peloton